As I mentioned in a couple of places we have no grid-supplied electricity at the farm (and won't have any until we build a house) so we get by with solar, batteries and 2 generators: a Honda 3000 and a Oman 6500. I publish this event and others to share some real-life events as we develop this farm (see "About"). They are cases of how we overcame adversity, not to brag but to show what you can do when things get serious. In this case I wanted to see how my freezeless stock tank performed in really cold weather so I purposely stayed at the farm with my two dogs when the forecast warned of a blizzard. I had stockpiled gasoline and propane; I had my Ford F350 4WD and my Kubota tractor and a horse trailer with really nice living quarters with a propane furnace. I was confident I'd be fine.

The first thing I discovered as the blizzard howled all night is that the furnace couldn't keep up with the cold. Before too long I had ice on the inside of my windows. So first thing the next morning I abandoned the sleeping quarters over the gooseneck. In the barn I found a big discarded cardbox so I used duct tape to close off the sleeping quarters then hung a heavy velvet drape in front of that and taped the edges. Oh and sometime during the night the drain line to the kitchen sink froze so by mid-day I had accumulated half a sink full of yukky water. 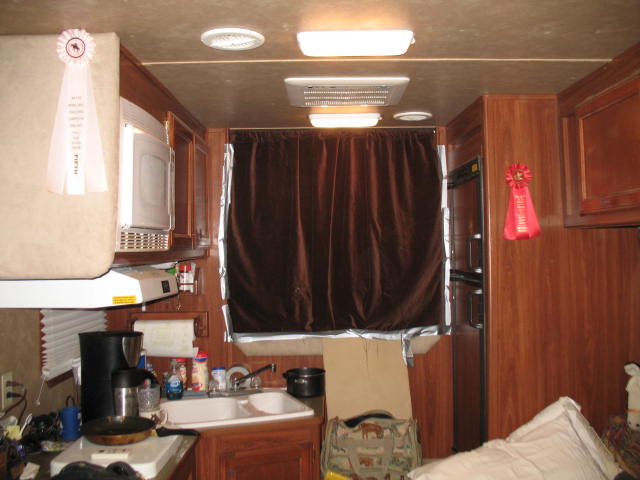 I also discovered if I pulled the "night" shades down it made a difference so I pulled all the shades. I used the other half of the velvet drape over the living room window. 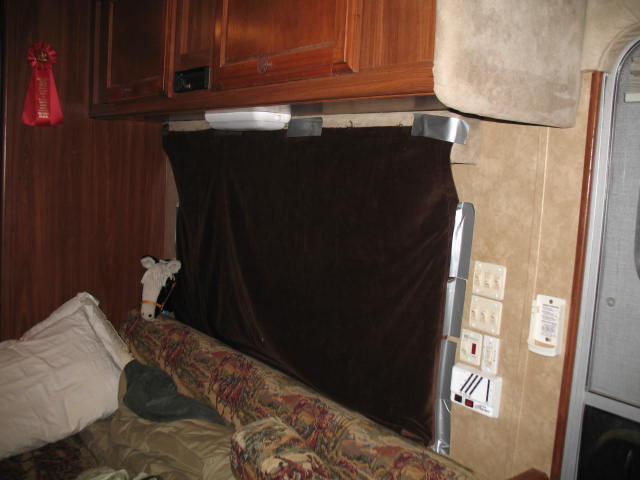 I got heavy bath towels and taped them over the dinette windows. I stuck a small pillow in the overhead vent and taped it in place.  Yes, that's a brandy bottle on the table. 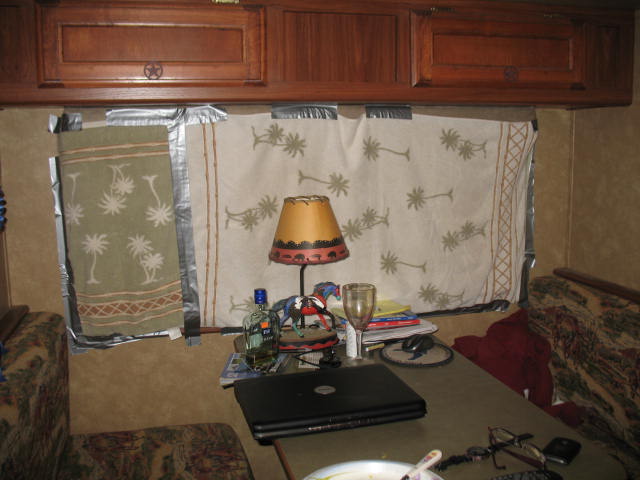 Although I don't have a picture of it I already knew that quite a bit of air came under the slide-out so I taped it closed and put the dog's big pillow bed in front of it. 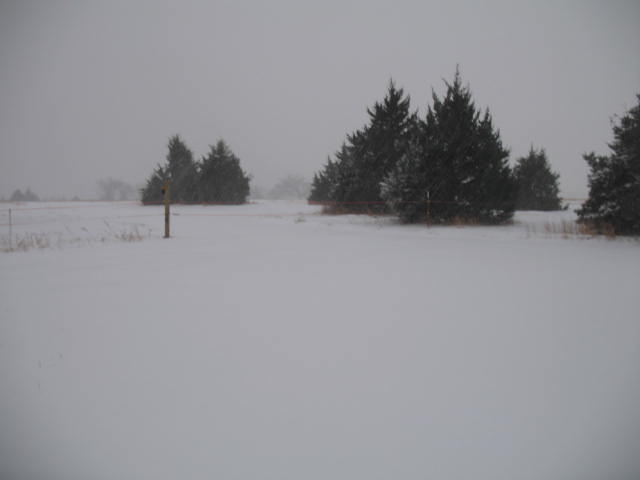 Then the Honda generator ran out of gas. I went out to fill it up. When I attempted to restart it, it wouldn't start. It had only done this once before years ago when it was fairly new and I immediately recognized what was wrong...the spark plug was fouled. I knew it would do no good to crank it. Now I was in a little bit of trouble. How long would the batteries last without the generator? If there was no electrcity for the blowers the furnace wouldn't run. I certainly couldn't use the electric heaters. I couldn't go anywhere either just yet, the blizzard was still howling. My only option was to get the big generator we use for powering the well pump out of the barn. Fortunately it was on wheels but I had to drag it probably 50' in a foot of snow. Thank God it started. OK, I wouldn't freeze to death immediately but... it uses twice as much gasoline. Suddenly it looked like my stockpile might not last long enough. So that night instead of running it I reasoned that it wouldn't kill me to light one of the stove eyes and let that be my only heat. The trailer has a carbon-monoxide alarm (which has gone off in the past so I know it works). That got me thru the night. 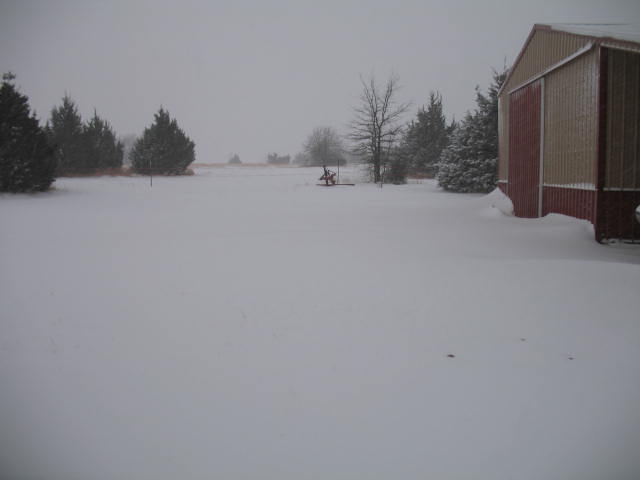 The next morning the blizzard was over. I had the Honda Owner Manual pdf file online so I looked up what kind of spark plug I needed and prepared to drive to town. Before when the spark plug fouled, I took it to Northern Tools. Now I'll have to change it. I got in the truck. Guess what?... the truck wouldn't start. Tried the tractor. The tractor wouldn't start. OK, so now I'm in a little more trouble. I reluctantly called my husband in Georgia. He said the truck had an engine block heater. After crawling around under the truck twice looking for the plug I finally looked in the owner's manual. There it is, right in the opening of the front bumper. So I got an extension cord and plugged it in. While waiting I called a Kubota dealer and found out it does not have an engine block (or any kind) of heater. He suggested an oil dipstick heater. So I put that on my list... if the truck started. After a couple of hours I tried the truck and it started. Wahoo!  Thank God!  I put it in 4WD and headed the 7 miles to an auto parts store. One challenge down, 2 to go. 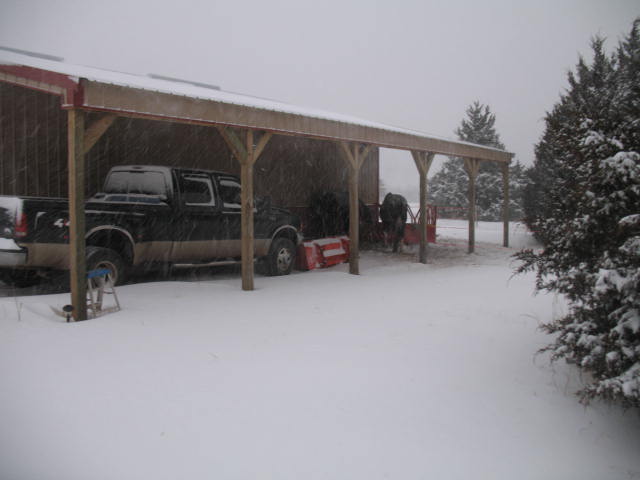 Got the spark plug, ratchet, extension and socket. Got the oil dipstick heater. Got a battery charger, another extension card and a multi-plug thing. I bought a nifty little round heater at Wal-mart. Bought some more gas. Headed back to the farm. Following the Honda owners manual I was able to change the spark plug. Those of you who've done that know what tight quarters it is and that you have to do it by feel. But it got done and it fired right up. Two challenges down, 1 to go. Now I turned my attention to the tractor. After the oil dipstick heater had been in place 3 hours the tractor still wouldn't start. By now the battery had lost too much juice and you can't start a diesel without enough juice. So hooked up the battery charger while I thought about how I could warm up the engine block. I put the litte round heater under the engine. I took more cardboard boxes and blocked the front back & sides of the lower part of the tractor. Then I took a 9x13 tarp and draped it over the top of the tractor. Then I went back in the horse trailer to wait. When I came back 2 or 3 hours later the battery was charged up and it was reasonably warm under my "tractor tent". So I said a prayer, climbed in the cab and turned the key. Voila! It started right up! Yahoo! Three challenges down! 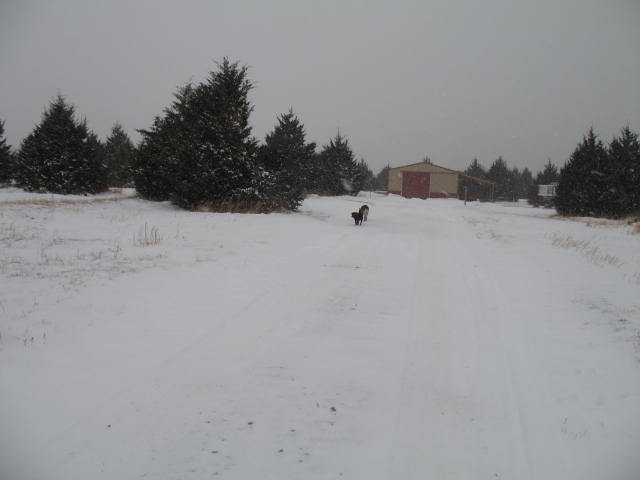 In a couple more days when the highways cleared up I drove back to Dad's house.  What an experience!

Would I purposely stay in a blizzard again?  No.  A horse trailer is not made for 0 degrees. Was I glad I did this time?  Yes, I learned some valuable skills and it's a great feeling to have conquered the challenges!